Apply now for your scholarship

You’re already positioned to gain a degree well respected by industry. Now gain a competitive edge with an ECS scholarship. An Ada Lovelace Excellence Scholarship from ECS will help to enhance your career, even before you start your undergraduate student journey. You’ll be positioned alongside a small group of elite students and alumni who have been recognised as potential leaders in their fields.

As excellence scholars you will enjoy being part of the scholar’s network within ECS, with additional social activities, and access to mentoring from academic and career staff.  Ada Lovelace was the first programmer, who realised that Charles Babbage’s Analytical Engine could be used for more than just calculations. At ECS we want to foster a diverse new generation of people who will also change perceptions of digital technology and lead the field in new directions.

Applicants from the UK may submit an application for one of twelve available scholarships to a value of £2,000 each. The deadline for applications is midnight 13 April 2022.

Applications must be submitted using the link below and the successful applicants will be notified by email before the end of April 2022. The award is conditional on the successful applicant selecting an Electronics & Computer Science Undergraduate Programme as their firm choice and meeting their offer conditions. The decision will be made by a panel of ECS academics based on the applicant’s response to the registration question.

Please answer the following question in 500 words or less:

How would you use digital technology to bring a positive benefit to your local community?

If the conditions are met the award itself will be made in Semester 1 of the first year of the successful applicant’s programme.

To apply please complete the registration form. You will need your UCAS number and a valid email address. You will receive a confirmation email from the system on successful submission of the form. If you do not receive this email within 24 hours then please attempt the registration process again. 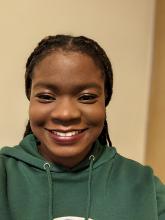 "When I came for the applicant day I imagined myself as an amazing programmer, who would build a company that excelled at not only creating the most amazing innovation in Artificial Intelligence, but also giving young girls who had not seen anyone like them in Computer Science a reason to believe in themselves when they saw me. I spoke to one of the professors and she was delighted that I had decided to do Computer Science, explaining how in the recent years, the number of females in Computer Science had declined. When I told her that it was not uncommon for someone to challenge me about doing computer science with a reason that it was a male-dominated course, and how that increased my desire to do it, she told me about the scholarship and what it aims to do, so I applied. When I found out I got the scholarship I felt happy and surprised. I hope it will help me in my path to educate more young girls about how to follow their dreams and see what the future holds. It’s changed my mindset in a way that I am now more likely to do things that I have not done before. I’m more motivated to speak to people about the importance of diversity in science, especially in research. Just remember, it doesn’t matter if you are going to be the only female in the room, once you have mustered the courage to do what you believe in, only you can decide to quit pursuing it." 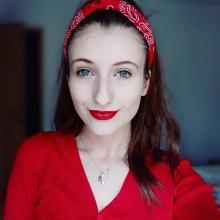 "I was fascinated by mathematics ever since I started primary school, leading to me focus on more technical subjects in school such as physics and chemistry. When I started high school in Romania, programming became a mandatory subject in my class. I was immediately fascinated by the problem-solving skills required and the range of projects I could solve. I participated in a couple of mathematics and coding competitions which I enjoyed, so I decided to pursue a Computer Science degree at University. My university advisor told me about the scholarship. I applied with their help and it was straightforward and easy. When I found out I got it, I was very excited! It boosted my confidence as there was a sense of recognition from the University towards my opinions and values which made me feel appreciated. There was certainly a financial relief too as many costs were incurred at the beginning of my student life. I recently graduated with first class honours and started my first graduate role with Amazon as a Software Development Engineer. The scholarship led me to be more confident in my views and to learn to speak up. I would love to see more young women encouraged to try programming, especially if they are naturally talented at mathematics. Know that there is immense support for everyone to learn to succeed – if you wish to. STEM can also be a career path where you can make an impact on the whole world. Own your career, only work where you feel impactful. There are plenty of teams, companies and opportunities waiting for you."

Who was Ada Lovelace?

Ada Lovelace invented the world’s first computer programme and is an inspirational role model for women in STEM everywhere.

Today Ada is recognised as the first computer programmer and her legacy is celebrated on Ada Lovelace Day, which is not only about celebrating but about keeping her legacy alive.

Read on to find out more about Ada's life and achievements.

1815 - Ada was born, the daughter of Annabella Milbanke and the famous poet Lord Byron. Ada had an unusual education for a woman at that time as her mother, who had mathematical training, insisted that Ada learn mathematics.

1833 - Ada met Charles Babbage, who is credited with inventing the first mechanical computer, at a party. When Babbage demonstrated the small working section of an engine to her, Ada was inspired.

1843 - Ada published a translation of a French article on the Analytical Engine which included extensive notes of her own. These notes included the following:
- A visionary insight into the potential of computers to act upon things other than numbers, such as composing elaborate pieces of music with huge complexity or analysing all subjects in the universe.
- A step-by-step sequence of operations for solving mathematical problems, the world’s first complete computer programme - marking the significant leap from calculation to computation.