Postdoctoral Research Assistant at the University of Oxford 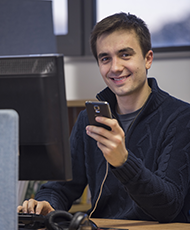 "I first came to Southampton in 2007 from Italy to study a BEng in Software Engineering. I chose Southampton because of its high rankings for Computer Science and also because I saw World Wide Web inventor Sir Tim Berners-Lee worked there.

My supervisors both on my BEng and my PhD were excellent in their fields and this raises the expectations from their students. If you are choosing Computer Science I wouldn’t know a better place to study than Southampton.

“The research environment at Southampton is incredible with very high quality academics. This is reflected in their teaching. They are always striving for the best publications and the best venues for conferences.

“My supervisors both on my BEng and my PhD were excellent in their fields and this raises the expectations from their students. If you are choosing Computer Science I wouldn’t know a better place to study than Southampton.

“My PhD has focused on monitoring the presence of animal species by listening to the sound they make through a wide variety of technologies such as smartphones. Many animals are difficult to spot because they are nocturnal, very small or elusive, however, the sound they emit can be a very good indicator of their presence.

"For the past two years I have been looking for a critically endangered insect called the Cicadetta montana - the New Forest Cicada - that has only ever been found in the New Forest, in southern England. It is the only species of cicada in the UK and hasn’t been seen or heard for the last 20 years.

"Its call is so high-pitched that anyone over 40 would struggle to hear it so I’ve developed a smartphone app that can record the sound of the cicada and give immediate feedback about whether a cicada is in the vicinity or not. So far more than 3,000 people worldwide have downloaded the app and have submitted more than 10,000 reports. Unfortunately we are still waiting for a positive report from the New Forest.

“In the future this app has great potential to be extended to other species such as bats and birds or even elephants and rhinos. As part of my PhD I have been on secondment to Microsoft Research, in Cambridge, and the Massachusetts Institute of Technology (MIT), in the USA, to research how I can expand the app.

“Both secondments were really useful, I gained valuable industry experience into how to develop my work further. At MIT I explored the concept of using public engagement to monitor air quality through smartphones and wearable sensors, while at Microsoft Research I investigated how the app could be expanded and translated to cover more generic wildlife classification.

“Recently I was delighted to win the Silver Medal for Engineering in the SET (Science, Engineering and Technology) for Britain awards held at the House of Commons. I joined other PhD students and Early Career Researchers who got the opportunity to present their research to a range of politicians and a panel of expert judges.

“The competition encourages, supports and promotes Britain’s early stage and early career research scientists, engineers, technologists and mathematicians who are an essential part of continuing progress in and development of UK research and development.

“I now work as a post doc at the University of Oxford where I continue my research into bioacoustics data analysis, working on malaria-infected mosquitoes.

“Eventually I would like to apply everything I have learnt to supporting developing countries through work in charities or non-governmental organisations. Phones and smartphones have a huge market in developing countries, and with these platforms the possibilities are endless.”