CEO of the Weightless SIG 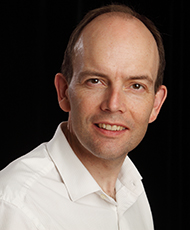 What made you select the University of Southampton?

It was the top UK University for the course that I wanted to follow which was Electronic Engineering. Also it was located near to lots of good cycling territory!

Achieving a good degree can set you up for life, but equally the time at University brings a maturity that is important in relationships, social skills and much more.

What is Southampton like as a place to study?

I enjoyed it. It’s hard to compare with others as it’s the only University I’ve studied at. It seemed to me to be friendly, easy to get around, it had a good set of Halls of Residence and a campus that was both somewhat enclosed giving a good collegiate feel, while at the same time not too isolated from the real world.

What did you enjoy about the course?

Mostly the challenge. With top students attending it was possible to cover a lot of ground quickly. That made for interesting lectures.

What opportunities did you take up that really added value to your experience as a student?

I guess I’d have to mention ballroom dancing since that’s where I met my wife! I also got heavily involved in rowing in my first two years but turned out not to be particularly good at it – my main memories from this were very cold early mornings on the river.

How did your studies and experience at Southampton shape your future?

In some ways very directly. It was in my third year while on a communication module, that the lecturer, Professor Ray Steele, approached me after I’d asked lots of questions. He suggested I did a PhD with him. I responded I’d like to, but wanted to get paid something and ended up working for his consultancy company while doing a PhD part-time. That was the perfect start for me on a career in wireless communications and my entire career direction can be traced back to that fateful lecture. Since then I’ve worked with some of the Professors and lecturers on books and other initiatives. Some of the alumni in my year also continue to be pivotal – I ended up working with two at various times in my career and right now that first consulting company is a close partner in a current venture I’m leading.

Tell us about your current role?

I work half-time as the CEO of the Weightless SIG – the standards body that is designing and pioneering wireless machine communications. If it all works out it could become the equivalent of Bluetooth for machines and could materially change the world we live in. I have my own consulting business, have positions on a number of advisory boards, and play multiple roles in academia and with Institutions such as the IET, the IEEE, Cambridge Wireless and the Royal Academy of Engineering. It’s certainly fair to say that every day is completely different!

When you graduated what was your ambition and do you feel you’ve achieved it?

Perhaps like most I wanted to make a difference in my field and I wanted to earn lots of money. My PhD topic was the idea of varying the data rate dynamically in a wireless link according to the quality of the signal (“variable rate modulation” for those in the field). This is now a key part of almost every wireless device we use today. I’ve designed complete radio systems such as the one used by the European railways today and some of the initiatives I helped with for radio spectrum management are widely used around the world.

Do you have any future ambitions?

I’m just about to become President of the Institute of Engineering & Technology (IET). This has been a key ambition for many years. The IET is the largest engineering institution in the UK with over 160,000 members. It provides a professional home for life for engineers and influences key policy decisions on engineering matters.

Being President will be so all-encompassing that I find it hard to focus on what my ambitions might be beyond that. I’d like to bridge the gap more between academia, Government and Industry, perhaps as Chief Scientific Advisor to a Government department or similar. I’d like to continue pioneering the Weightless technology until it is well-established and there are plenty of cycling challenges still out there…

What are you most proud of?

I was extremely proud to have come top of my year at Southampton in the final exams – especially given the very talented students around me. Becoming one of the youngest ever Fellows of the Royal Academy of Engineering was a great moment, as was being listed in “Who’s Who”.

What advice would you give to a student starting their degree at Southampton?

Life is all about balance. University life is no exception. There is an inherent balance between study and enjoying the experience. Both are critical – achieving a good degree can set you up for life, but equally the time at University brings a maturity that is important in relationships, social skills and much more.

What tips would you give to current students looking to start a career in your sector? What could they be doing now to make themselves more employable when they graduate in the future?

Engineers who can communicate well with others, can understand the social context of their work and can be part of inter-disciplinary teams are highly valuable. As well as making sure they understand the engineering side I’d recommend doing as much as possible to build social skills such as joining a debating society, getting involved in politics or Institutions and taking any available courses in management skills.

Beyond that, I’m a great believer in serendipity. A good career is a series of happy coincidences and meetings. And the best way to maximise these is to be out networking and meeting as many people as possible.